Democrats think Republicans are hate-filled, racist, xenophobic nazis. They want to control everyone's life, and force them to conform to the dictates of a theocratic, patriarchal prison state. Think this is an over-statement? Spend twenty minutes watching CNN, another twenty minutes on Twitter and yet another twenty minutes watching any one of the late night "comedians". This assessment of half America's population strikes Republicans as odd, since all they want is to be left alone to raise their families in accordance with the Judeo-Christian values that built Western Civilization; keep the money they earned through their own honest labor; and defend the freedom of everyone to speak their minds, without fear of reprisal from an angry woke mob.

Republicans think Democrats are mindless automatons, motivated primarily by envy, greed, racism, self-loathing and hate. They want to control everyone's life by establishing an Orwellian, all-powerful state that eradicates the dignity of the individual, feeds off the hatred of the lazy to punish the success of the industrious, and forces everyone to conform to the norms of an intellectually vacuous, soul crushing, totalitarian kakistocracy. Think this is an overstatement, spend twenty minutes listening to one of the Daily Wire podcasts, another twenty minutes on Gab and yet another twenty minutes watching OANN. This assessment of half America's population strikes Democrats as odd, since all they want is to have everyone feel comfortable, warm, fed and good about themselves; have their life choices affirmed as equal in prudence and virtue to everyone else's; and make sure no one suffers emotional harm from the judgement or ill will of others.

Our Constitution was made only for a moral and religious people. It is wholly inadequate to the government of any other.

These words from our second President are often quoted by people of faith as proof that the rise of secular humanism has destroyed our constitution's capacity to govern the nation effectively. But they misunderstand the reasons why that might be the case. They presume that the apparent anti-religious bigotry of the left has produced a morally rudderless society, incapable of discerning right from wrong, and unable to recognize any value in human life that might inconvenience the desires of the present moment.

First, it would be a mistake to assert that leftism is somehow antithetical to religion. On the contrary, leftism itself is an extremely powerful religion. A religion that enforces universal orthodoxy with a degree of dogmatic purity even pre-Reformation Catholicism never approached. Leftists do not hate religion per se - they simply despise all manifestations of Judeo-Christian tradition.

America hasn't lost religion. We've merely taken the five-thousand year old traditions that animated the founders and informed the structure of our institutions, and exchanged them for a post-industrial agglomeration of nihilist platitudes, kindergarten preconceptions of "fairness" and an unrestrained drive for material gratification. As Thomas Jefferson might have said, this new national religion is "...foreign to our constitution, and unacknowledged by our laws." So it isn't that America has no religion, it just so happens that our newly ascendant religion lacks a critical component central to the Judeo-Christian traditions of colonial and early American life - namely, that of humility.

Whatever else may be said of the founding generation, they shared a keen sense of humility about the inherent brokenness of human nature. Far from imagining that their ideas would usher in a golden age of utopian perfection in human affairs, the founders crafted a system of government designed to weather the inevitable onslaught of unchanging human imperfection. The decision to found a republic, instead of a democracy simply recognized that any government founded on the will of the majority could leave nothing but human misery in its wake.

Whether as a matter of practicality...

“It has been observed that a pure democracy if it were practicable would be the most perfect government. Experience has proved that no position is more false than this. The ancient democracies in which the people themselves deliberated never possessed one good feature of government. Their very character was tyranny; their figure deformity... We are a Republican Government. Real liberty is never found in despotism or in the extremes of Democracy.”

...or as a matter of sustainability...

“… democracies have ever been spectacles of turbulence and contention; have ever been found incompatible with personal security, or the rights of property; and have in general been as short in their lives as they are violent in their deaths.”

...the founders knew that human nature compelled them to craft a system of government providing some means of protecting us from each other.

Federalism, state sovereignty, separation of powers, presidential veto, judicial review... These were measures aimed at ensuring the power to create human misery would never be concentrated in too few hands. And these are the very same "obstacles" that enrage progressives for their historical ability to keep them from getting what they want. In the roughly 110 years since Woodrow Wilson initiated the modern progressive assault on our republican form of government, the left has remained unswervingly focused on the methodical destruction of these institutional speed bumps on the road to utopian human perfection. While at the same time, in the words of the late William F. Buckley, Jr., "A conservative is someone who stands athwart history, yelling Stop, at a time when no one is inclined to do so, or to have much patience with those who so urge it."

So each side remains convinced that the other side is evil, and in the enduring judgment of the nation's founders, each side is correct in that assessment. All of this to say that far too many on the left and the right are certain that all would be well, if only their side could wrest unchallenged power from the other. If we can only silence enough opposing opinions, stockpile enough guns and ammunition, flip enough legislative seats, confirm enough judges, outlaw enough religious practices... then surely we will get to the promised land.

So long as we persist in this delusion of moral certitude, and fail to rebuild the institutional structures that have served so well to protect all of us from the imperfections of each other, then as Madison predicted, America's remaining days are destined to be "..as short in their lives as they are violent in their deaths.” 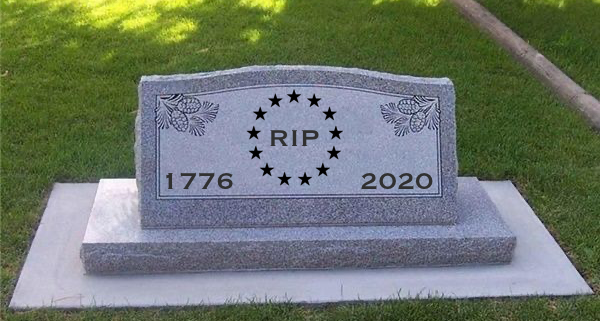 We awaken this morning to the no longer deniable reality that we live in an Empire of Lies. Where the stories we are told as "news" no longer comport with